I am constantly amazed at how individuals who exhibit many of the characteristics of being good exegetes will make the absurd error of referring to Jesus as the Second Adam. A simple reading of the relevant texts would lead one to eschew such an error. The relevant passage in this instance is 1 Cor. 15:45 depicted in the chart below Figure 1: 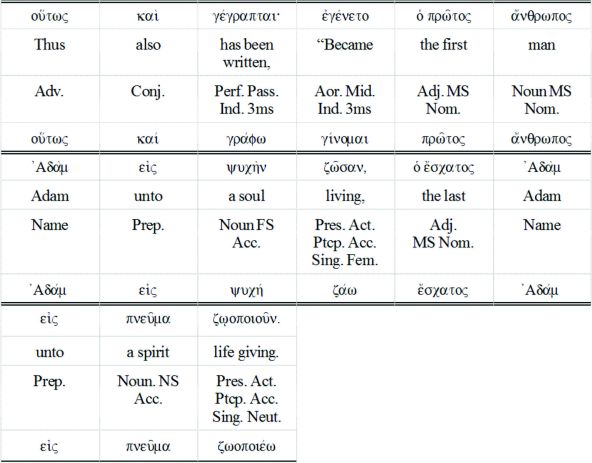 It may seem trivial to quibble over these designations, but it is theologically and exegetically important. As the Last Adam, Jesus is the progenitor of a new humanity that has been created in His likeness, Eph. 2:10. There were three previous Adams in biblical history, see chart in Table #1. 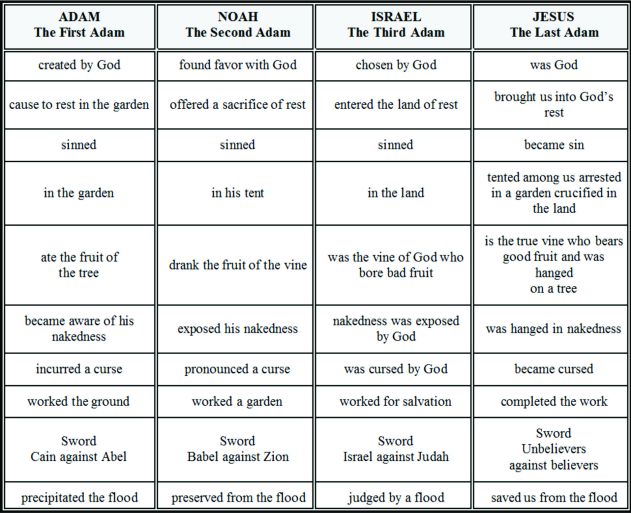 The previous Adams all failed to accomplish the task they were given. That task is set out initially in creation account: “Be fruitful and multiply and fill the earth and subdue it; and rule over the fish of the sea, and over the birds of the sky, and over every living thing that moves upon the face of the earth” (Gen. 1:28). The creation account, the creation days are divided into two major parts. The first three days are dedicated to subduing the earth. The last three days are dedicated to filling the earth. In day one God creates light shining upon the earth. In day four God divides the light in to day and night. In the second day God creates the expanse that separated the waters above from the waters below. On the fifth day God filled the waters with living things. On the third day God separated the waters from the dry ground. On the sixth day God filled the dry ground with living creatures and with mankind. The pattern is set, then, as subduing and filling. Whereas God subdued and filled, the First Adam was commissioned to fill and subdue; in other words, to imitate God. This commission is repeated with reference to the Second Adam and the Third Adam, each of whom failed to fulfill the commission.
The church was also given this commission in Matt. 28:18–20: “Go therefore and make disciples of all nations, and baptizing them in the name of the Father, and the Son, and the Holy Spirit [filling], and teaching them [subduing] to observe all that I have commanded you.”
In the case of the first Adam, mankind continued to inherit the sin nature. But in the Last Adam, mankind was given a new birth into the family of God. By Jesus’ crucifixion, death, burial, and resurrection, mankind has died to sin and is raised to a new life. Indeed, Jn. 3:5 gives the picture of the new creation: “Jesus answered, ‘Truly, truly, I say to you, unless one is born of water and the Spirit he cannot enter into the kingdom of God.’” Every translation places the definite article before the word ‘spirit,’ but there is no definite article in the text. This is not a reference to the Holy Spirit. It is, rather, a re-enactment of the creation what was by water and breath. The new creation is also by water and breath. The water is not a reference to baptism, or to the Word of God. It is a reference to the cleansing that washes one clean from sin. In Jn. 3:10 Jesus said to Nicodemus, “Are you the teacher of Israel and do not understand these things?” Where would Nicodemus have understood these things? From the Old Testament, especially Ezekiel that pictured the regeneration of the nation of Israel in the image of the dry bones. They would be washed with water to make them clean, and God would breath into them the breath of life. This is the picture re-enacted in Jn. 3:5.

Professor of Bible and Biblical Languages at Southern Evangelical Seminary
View all posts by Tom Howe →
Image | This entry was posted in Uncategorized. Bookmark the permalink.